The fetal testicles begin their descent from the peritoneal cavity into the scrotal sack at approximately the 30th week of gestation. The left testicle precedes the right and usually enters the scrotum during the 32nd week. Both testicles are usually palpable in the upper to lower inguinal canals by the end of the 33rd to 34th weeks of gestation. Concurrently, the scrotal skin thickens and develops deeper and more numerous rugae. 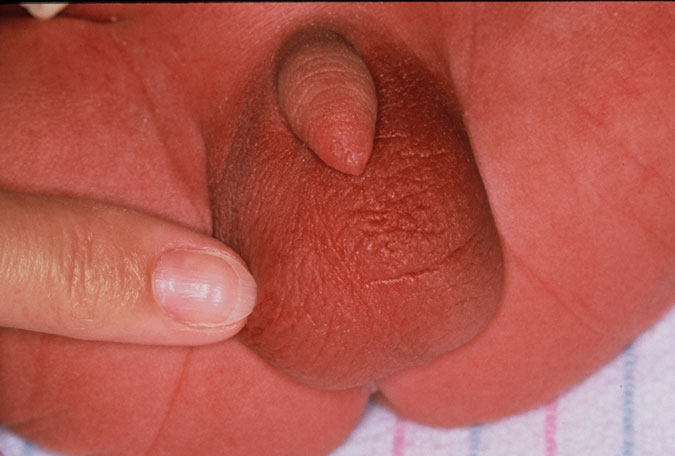 Assessment of Fetal Development of the Male

Testicles found inside the rugated zone are considered descended. In extreme prematurity the scrotum is flat, smooth and appears sexually undifferentiated. At term to post-term, the scrotum may become pendulous and may actually touch the mattress when the infant lies supine. Note: In true cryptorchidism, the scrotum on the affected side appears uninhabited, hypoplastic and with underdeveloped rugae compared to the normal side, or, for a given gestation, when bilateral. In such a case, the normal side should be scored, or if bilateral, a score similar to that obtained for the other maturational criteria should be assigned.